How to Make a Bucket Set by Jim Spencer — Part I

Editor’s Note: The following is the first of a two-part article by Jim Spencer sharing practical tips for bucket use to make your life as a trapper much simpler. To read Part II, Click Here. 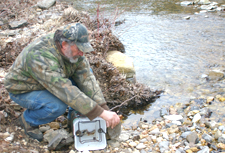 Buckets and ’coon trapping go together like pancakes and maple syrup. But there are tricks to the trade that can make or break you, and after nearly 20 years of bucketing ’coons, I’m still working the kinks out.

My trapping partner and I come up with new ideas every year about bucket trapping. Not all the ideas pan out, but some of them do, and every year Bill and I gain proficiency at catching ’coons in buckets. If we can just live long enough, we might eventually get pretty good.

The tips and tricks that follow are strictly personal opinion. Not even Bill and I agree on all of them. But I bet some of them will work for you.

The problem with the #120 is obvious; it’s not big enough. If it’s the largest bodygripper your state allows, you can make it work — sometimes — by positioning the trigger wires to one side and/or bending them into the bucket, so the ’coon will get his head far enough into the trap for the jaw to catch him behind the ears. But many ’coons will simply refuse to enter the trap or else they’ll reach in and get caught by a front leg, almost always resulting in a miss and an educated ’coon.

The #220 is big enough, but there’s the matter of non-target catches. In a perfect world, no trapper should ever make a lethal-type set where there’s a likelihood of catching domestic animals, but the reality is that unless you’re trapping on the moon, there’s almost always a remote chance it could happen. A #220 is much less friendly than a #160 in this undesirable situation.

Anyway, #220s are heavier and considerably more expensive than #160s, — two disadvantages you can’t ignore. The standard #160 is plenty for even the largest ’coon, and it’s stout enough for the occasional bobcat, otter or gray fox that sticks its head in there.

Use Square Buckets
When I first started using buckets, I used the round 5-gallon variety. What a pain. They didn’t stack well, they took up too much room, they were too bulky, the opening was too big for #160s and, being round, they were prone to roll around even when braced into place with sticks and rocks.

Square buckets solve those problems. Most of the ones available today have a 9-inch by 9-inch opening and are 13 inches deep, and are just right for #160s. (Actually, #220s fit even better, but re-read the preceding section before you use them.)

Some trappers have good luck with the flimsy black potting containers used by nurseries and gardeners, but they’re too lightweight to last long under trapline conditions, and most are too shallow besides. You can also build wooden “buckets” that fit your traps perfectly, but they’ll be heavy. Unless you’re only going to use a few, they’ll load you down in a hurry. If you’re serious about using buckets for ’coons, use square plastic buckets. Period.

Where Do You Get ‘Em? 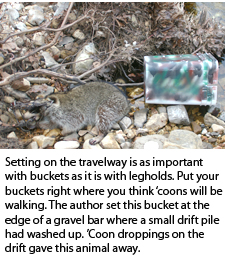 Short answer: practically anywhere. Fast-food restaurants like Wendy’s get pickles, condiments and other things in buckets. Bakeries often get doughnut icing and shortening in square buckets.

Veterinarians and boarding kennels often buy kitty litter in square buckets. Put on your thinking cap; there’s a business in your area that buys stuff in plastic buckets. They’re usually happy for you to haul them away.

Or, you can almost always find plenty of buckets at the larger trapper conventions, but buying them at a convention is the most expensive option — a dollar at least, often $2 per bucket.

When I switched over to square buckets, I’d done enough reading and talked to enough other trappers to know notching the buckets was the way to go.

At first, though, I cut the notches too wide and deep, and the traps were wobbly and were too far inside the buckets. A width of about ¼ inch and a depth of about 2 inches is best, but Bill and I don’t agree on the best shape for the notch. I think a notch that tapers down to a point is better, because I believe it wedges the trap springs more securely.

Bill likes a square-backed notch with a uniform ¼-inch width all the way back. He says if the notch is narrower at the back, it tends to shove the trap forward and out of the bucket. Maybe he’s right. But we catch good numbers of ’coons with both types of notch, so maybe we’re over-thinking it.

We’re on the right track with the 2-inch maximum depth, though. If the notch is deeper, it goes beyond the bucket rim’s molded reinforcement rings, and it also positions the trap too deep in the bucket. With the trap too far in, the ’coon can get closer to the bait before entering the trap.

At some point, he’s going to try to reach in with a paw instead of sticking his head in. Not good.

Other suggested modifications: Remove the bails so they’ll stack better. Drill a ½-inch hole on the sides of the buckets that aren’t notched, close to the bottom of the bucket. These provide drainage and let you fasten bait in back, or stake the buckets down with ½-inch or 3/8-inch rebar.

To Paint or Not to Paint?

However, if you’re trapping inside barns or outbuildings, or in a secure area, don’t bother painting. The ’coons don’t care, and in fact white buckets may well serve as visual attractors.

Like many other trappers, Bill and I originally used a 6-foot length of 14-gauge wire on each bodygripper. When we’d set a bucket for ’coons, we’d unwrap the wire, twist it around a root, tree, limb or trap stake, then make the set. That was time-consuming and the wire was stiff, kinked and hard to work with.

Here’s a better way: Pre-rig lengths of 5/64 7×7 snare cable, about 6-feet long, with a 2-inch loop on one end and a quick-snap connector on the other. This length of cable can be coiled up and twisted around itself like a snare and is ready to use in a second. Run the cable around the tie-off point — rock, tree, limb, trap stake — then clip it to the chain or spring of the trap. It seems a ’coon would open the snap when caught, but Bill and I have never had it happen.

We make these fastener cables during the off-season and have a couple hundred ready to go at all times. They’re re-usable, but eventually the cable gets kinked and warped the same way beaver snares do. When this happens, cut the snap off, fit it to another 30 cents worth of cable and presto, it’s brand-new.

Bait Socks
One of the biggest problems we have using buckets is what we call “reachers” — ‘coons who try to grab the bait with a front paw, keeping their head outside the bucket. They’ll eventually spring the trap, but you get few catches this way.

As mentioned above, having the bait too close to the trap is one of the main causes for this behavior. You can pile the bait in back all you want, but mice and small birds often find it and scatter it. If a ’coon can reach it with a paw, he’ll likely try.

Wiring large baits like fish chunks or fish heads to the back of the bucket is one solution, but it’s time-consuming and you always have to get the fish.

Bill and I use cheap, dry dog food soaked with fish oil. We make bait holders from discarded socks, sleeves from old shirts and the like, and we put a handful of dog food inside of them. Then we attach 6 inches of 14-gauge wire and stack as many of these bait socks as we can in a gallon bucket and cover the socks with fish oil.

This fish-oil permeated bait can be suspended in the back of the bucket, off the floor. Even if a mouse does chew a hole in the sock, he usually doesn’t get all the bait. If he does, there’s still the oil-soaked sock itself.

Late last season, I helped a friend test a new product he calls the Bait Safe, a small metal container with holes in it that is meant to hold bait at cubby-type sets. It worked well. I don’t know when it will be commercially available, but it will be a good tool for bucket trappers.

It’s important that the ’coon not spring the trap too soon, so you need to get the triggers out of his face. Bill and I have been all over the board here, and what’s worked best for us is keeping both trigger wires close together and as far to one side as possible, with the trigger wires on bottom and on the jaw farthest into the bucket. We get the best strikes and highest catch percentage this way.

Jim Spencer is executive editor of Trapper & Predator Caller. To read more articles by Spencer or our other experts, Subscribe Now. What bucket tricks have you used to fool critters? Share your thoughts on this article and tips from the field in the Trapping Forum. To read Part II of this story, Click Here.

Discover new techniques for finding and trapping more fur, how to make the most of your catch with harvest trends and prices, skinning techniques that can increase the value of your furs and more all in Trapper & Predator Caller. Subscribe Now