Learn how this state is facing its wolf management head on, with trappers and hunters leading the way.

Major controversies surrounding the protection of wolves have taken over the courts, trapping associations, landowners and many others who deal with these apex predators. Many people who are not properly educated on the real issues surrounding wolves want to see them totally protected, to roam freely and continue to do what they were put on the Earth to do. Simply stated, they kill.

Despite what some may say, wolves do sometimes kill just to kill and not feed on the prey. Elk, deer, moose, livestock, pets and just about any other critters that live in wolf territories are facing the consequences. The federal government and too many states have ruled to protect these animals from trappers and hunters, and the results have become more and more detrimental. Until these predators are allowed to be managed and harvested in one form or another, things are only going to get worse.

Thankfully, Idaho is one of the few states that has realized the problems caused by too many wolves, and they have been active to get things under control before it is too late.
In 1995, 15 wolves were introduced to the state of Idaho. The state had high hopes of reaching 10 breeding pairs of wolves, for a total of 100 wolves. Well, they succeeded and are now paying for it. Just 10 years later there were an estimated 512 wolves living in the state.

The success of the wolf introduction surprised everyone. Today, Idaho’s predator biologists have documentation for 800 wolves, although many estimate wolf populations could be triple that amount. If 800 is the current population, that is eight times higher than what they hoped for. According to the Foundation for Wildlife Management (F4WM), wolf populations expand at 40% annually. Idaho’s wolves have continued to expand at 28% annually, despite their efforts.

Hunters and trappers in Idaho are doing their part to help combat the growing wolf problem. Photo credit: Jason Dlouhy

Each adult wolf kills at least 20 big-game animals every year, including healthy and thriving bulls, cows and calves, just to survive. That number does not account for surplus killings and spontaneous abortions in prey species caused by stress from wolf encounters.

Wolves certainly have a place in nature. That is not being debated. But so do ungulate wildlife. The Idaho Fish and Game manages the wolf population, setting quotas on how many wolves to remove in order to help other wildlife populations recover, so that future generations can enjoy all that Idaho has to offer.

The Foundation for Wildlife Management works with sportsmen and Idaho’s predator biologists to determine what areas in Idaho that ungulates (moose, elk and deer) have been most negatively impacted by wolf predation. They then designate reimbursement zones based on those, and other, factors.

Wolf hunting seasons of December 1 to March 31 have proven to require the most time, energy and financial investment for hunters to be successful. Whereas, a person may stumble upon a wolf while elk or deer hunting during the fall hunting season with very little invested. At the same time, trappers consistently spend more time due to mandatory trap check requirements, which demand more time in the field. For these reasons F4WM designates reimbursement amounts accordingly.

The organization will reimburse sportsmen $500 for any legally trapped or hunted wolf. In regions where elk are suffering more due to wolf predation, the reimbursement could be $750, or even $1,000 in a couple areas that have been hit especially hard. The Lolo elk herd had an estimated population of 16,000 animals in 1995. In 2016, the herd was estimated to be just 1,000 animals.

How do hunters and trappers get reimbursed? It is outlined on the F4WM website. Here is an excerpt:

The reimbursement request process is quite simple — to request a reimbursement, follow the detailed steps below:

The first step is to make certain your membership is current. You must be a member of F4WM prior to harvesting your wolf to qualify for reimbursement. (The exception to this is when IDFG Grant funding is being used for the reimbursement, which requires F4WM to reimburse both members and non-members alike.)

Start saving receipts prior to harvesting a wolf — receipts need to be for items purchased in relation to the scouting, hunting, or trapping of wolves. These can include items such as fuel, firearms, ammunition, traps, game cameras, outdoor clothing/gear, license & tag fees, ATV/UTV, 4-wheeler, truck purchase or payments, etc. 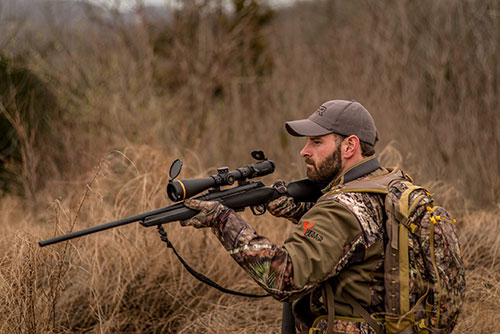 Hunters and trappers are allowed to harvest 20 wolves per season in Idaho. Photo credit: Howard Communications

Upon harvesting a wolf, send us a copy of your expense receipts for the amount of the reimbursement, based on the unit of harvest (See the chart above) and a copy of your Idaho Fish & Game mortality report (pink slip) proving it was a legal harvest, and what unit the wolf was harvested in. Reimbursement documentation can be sent via email to Teresa@f4wm.org or by mail to F4WM P.O. Box 821 Ponderay, ID 83852. You keep the wolf.

Once we receive and verify your reimbursement requests, your check will be mailed within 5-7 business days.

The Foundation for Wildlife Management also has some interesting numbers to pass along. “F4WM has removed 700+ wolves with just over $430,000 membership and sponsor dollars, with zero tax funding. That’s less than $615 per wolf, solely funded by Sportsmen, Ranchers and concerned citizens. Without the F4WM program, the Idaho Wolf Control Board would be charged with removing the same wolves. Their average expense to investigate livestock depredations and remove problem wolves averaged $9,005 per wolf in 2016, $8,003 per wolf in early 2017, and more than $9,000 per wolf in 2018 … 65% of which has historically been funded by Idaho state tax dollars. 700 wolves x $9,000 per wolf = $6,300,000… 65% tax funded = $4,095,000 state tax dollars potentially saved by implementation of our Wolf Harvest Reimbursement Program.

“F4WM brings those who want wolves managed — Idaho Fish & Game, outdoor enthusiasts, hunters and ranchers, together with those who have the ways and means to get the job done.”

Anyone can become a member by signing up at https://foundationforwildlifemanagement.org/. A yearly membership is $35 and F4WM reimburses both trappers and hunters who are successful.

For each wolf harvested, they estimate that 20 elk per year are saved. Foundation members have already harvested more than 100 wolves during the 2019-2020 season. That’s a lot of wildlife saved. 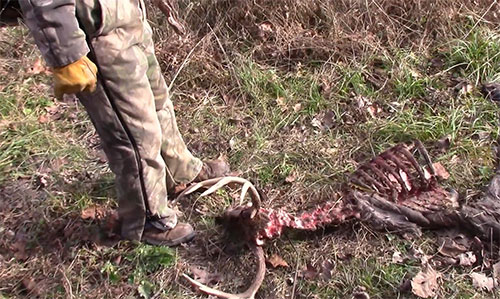 Wolves are wiping out deer, elk and moose herds across many states. Photo credit: Jason Houser

Recently, I asked experienced Idaho wolf trapper Jason Dlouhy if he has noticed an impact on the wolf population since this program began. His answer was very interesting: “Although members have already harvested more than 100 wolves this season, sadly, I do not believe we will ever be able to harvest enough wolves to counter the numbers born each year with the current regulations. Wolf trapping/hunting is costly and time consuming, and I believe that without F4WM, most dedicated wolf trappers (myself included) would not be able to put forth the effort that they do. Although wolf numbers continue to increase, F4WM keeps those with the time and ability to harvest wolves in the woods, which slows the increase.”

How does a wolf trapper set for these big animals? Jason gave us some insight on his tactics.

“My favorite sets are dirt holes with food baits and lures. Canned cat food, sardines or tuna fish for bait with a fish-type oil or scent outside the hole as a lure. One of the best wolf trappers in the state uses urine post sets almost exclusively with amazing results. One thing myself and other trappers I’ve spoken with have noticed, though, is that wolves do not come to wolf urine. Coyote urine is the choice of the trappers that I know.” 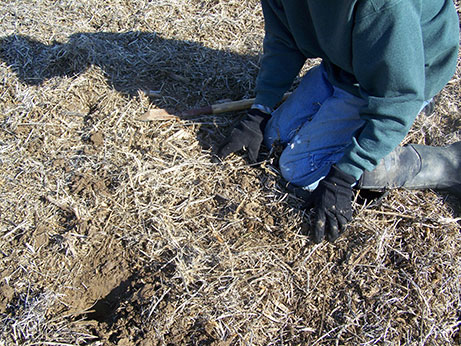 Dlouhy added, “Because of my set locations, I have not gang-set, but I will be looking for good places to do so. The most successful wolf trappers I know have excellent success with gang sets. A pack will usually hang around and/or come back after a pack member has been caught, which presents a great opportunity for multiple catches.”
Concerning backlash from the anti-trapping community, Jason had this to say: “Of course, there has been quite a bit of backlash coming from the anti-trapping community and those who believe wolves should not be harvested, but I’ve also been quite surprised how some are willing to listen and learn about trapping and management. Although a few will never be willing to listen, the controversy that seems to follow wolf management opens the door for discussion and education, which I believe has given many antis another perspective and food for thought.” 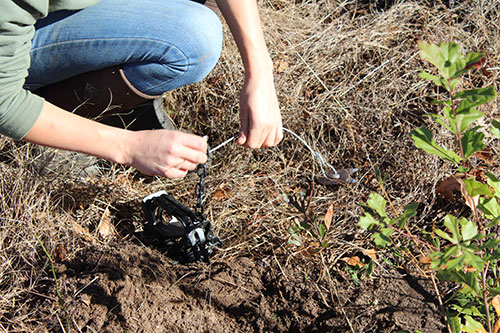 Wolf trapping is fun, but it is an extremely challenging task to successfully tag these smart apex predators. Photo credit: Jason Houser

Trappers in Idaho must attend a wolf-trapping education class before attempting to pursue these animals. Photo credit: Jason Dlouhy

Thankfully, the Idaho Department of Fish and Game and the Foundation for Wildlife Management are doing their part to help control the wolf population. Hopefully, the federal government and more states will soon follow suit and allow hunting, trapping or both. Sooner or later they are going to realize the negative impacts these apex predators have on overall wildlife populations. I just hope it isn’t too late. For more info on F4WM email: info@f4wm.org.

How to Call Wolves With Your Voice – The Ultimate Challenge

The Wolf’s Place in Wildlife Management